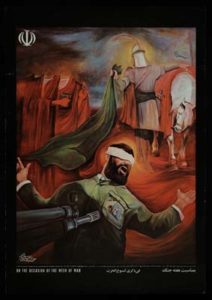 A blindfolded Iranian soldier is executed at point-blank range as Imam Husayn stands behind him, waiting to escort him into paradise. Next to the Imam are three headless figures—fellow martyrs that died alongside Husayn at the Battle of Karbala. The figure in the foreground holds a green Qur’an and points upwards with one hand, a gesture symbolic of witnessing or testifying to the unity of God. The strong contrast of the colors green and red carries deep symbolic meaning to Iranians, as red symbolizes the blood of Husayn and his fellow martyrs and green references both Muhammad and Husayn. The poster capitalizes on Iranian ‘Ashura mourning rituals, which encourage soldiers to see themselves as following in the path of the Karbala martyrs.