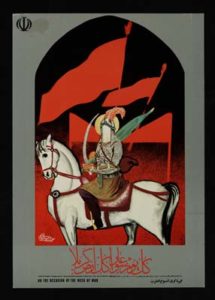 This poster depicts Imam Husayn at the Battle of Karbala. Husayn’s facial veil is indicative of his saintly status while also serving as a visual mechanism by which Iranians may insert themselves into his role at the Battle of Karbala. This interpretation is reinforced by the Arabic caption, stating that: “Every day is ‘Ashura and Every Soil is Karbala.” In emphasizing a battle scene, the poster utilizes the militaristic themes of ‘Ashura to unite the war effort with Shi’i religious imagery. Moreover, by tying the historical Shi’i past to the present, the Islamic Republic employed Chalipa’s painting to instruct Iranians to live everyday as if it were ‘Ashura, thereby promoting self-sacrificial acts that would ultimately lead to salvation through martyrdom.