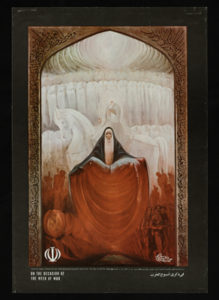 This painting depicts the salvific power of martyrdom according to Iranian Shi’i beliefs. A dead soldier’s body transforms into a tulip—the symbol of martyrdom in Iranian Shi’i iconography—as his mother cradles him in a posture reminiscent of Christian Pietà scenes. To the mother’s right is a row of tulips, sprouting embryonic soldiers, and on her left, adult soldiers march towards the battlefields, willingly heading towards their deaths. Behind the mother sits a white-robed Imam Husayn on his white horse. In the background, rows of headless figures represent the martyrs of Karbala. The painting encapsulates the cycle of martyrdom that the Islamic Republic propagated during the war. Iranians are depicted as born for martyrdom and are promised heaven and eternal paradise if they follow in the footsteps of Imam Husayn, sacrificing themselves for Shi’i Islam and the Islamic Republic.