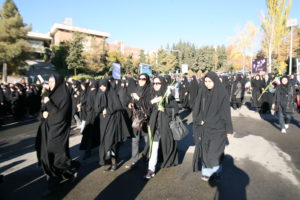 Professor Shahriyārī considered his students to be a part of his family. He would say that their mothers and fathers have entrusted them to our hands. If they became ill or had financial difficulties, he would look into the matter. Students who were assigned to other professors would even come and ask their questions of Shahīd Shahriyārī. Some of his student would complain about the fact that students who were not under his tutelage would wait in line outside his office in order to see him.