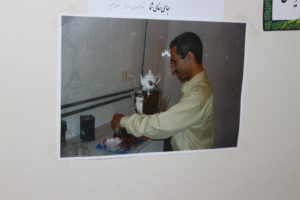 It was the month of Ramaḍān and we were guests at Professor Shahriyārī’s house. The eftārī meal (the meal with which one breaks one’s fast at sunset) was complete and simple at one and the same time. The atmosphere was warm and friendly and without any affectation or pretention. The center of these gatherings was Professor Shahriyārī’s wife. It was said that we needed each other. We wanted to help with the dishes, but she would not allow it. We said that there were a lot of plates, and it was the least we could do. She said that the dishes were Majīd’s share of the responsibility. We said that in that case we were doubly obliged. She said we have decided on a division of labor: the preparation of the meal is my responsibility and washing the dishes is his. The professor’s wife said that he would even do the house’s vacuuming. Their relationship was very intimate, and this could be seen from the way they spoke to each other.

We were preparing to leave because we had a long way to go to get back home and we had a small child as well. And although [it was clear that] Professor Shahriyārī was very tired, he insisted on driving us home.