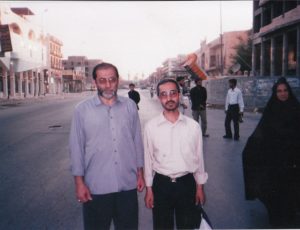 I had called on Professor Shahriyārī on some business and when we got that out of the way he asked me if I could keep a secret. I joked that he could tell me and that if the news of it didn’t get out, it would mean that I can keep a secret. He said, “If you don’t see me again, forgive me my trespasses against you.” I said, “You mean to say that you too are going the way of Dr. Ali-Mohammadī?” He said, “You never know.” This took place two or three months before his assassination. The next time I went to see him he said, “Take care of these things while I am still alive so that we can get an article out [on the subject].”

Masoud Ali-Mohammadi (24 August 1959 – 12 January 2010) was an Iranian quantum field theorist and elementary-particle physicist and a distinguished professor of elementary particle physics at the University of Tehran’s Department of Physics. He was assassinated on the morning of 12 January 2010 (some minutes before 8 o’clock, local time) in front of his home in Tehran, while leaving for university. Flynt Leverett, director of New America Foundation, has stated that while it is “highly unlikely that the United States was directly involved” in the assassination, it is “possible that a group or an individual” who received financial support as part of the $400 million US covert activities program initiated under the Bush administration against Iran, might have carried out the assassination. (Source: Wikipedia)