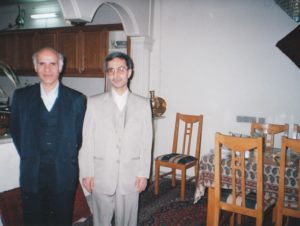 The subject of the Application of Radiation was inaugurated by Professor Shahriyārī. His wife related that he would look through the syllabi of universities in other countries and see that a given university has considered five courses for such and such a subject, and another university has considered five courses for the same subject. That in yet another university, there was a lab section associated with the subject. And so on. He would go through this data and organize them systematically and come up with a solid academic foundation for the subject where none existed hitherto.