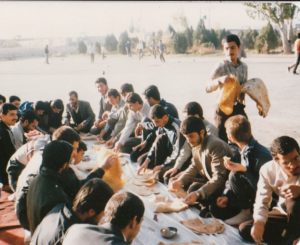 A group of graduates from Amīr Kabīr University would meet every six months to a year. Professor Shahriyārī was an attendee. In one of these sessions he gave me the name and address of a person and asked me to see if I could look into his problem. He said that the man lived in a village by the name of Kūhpāye about a hundred kilometers from Esfahān. Two weeks later I reported back to him that the gentleman in question is a well-educated man who is suffering from psychological problems.