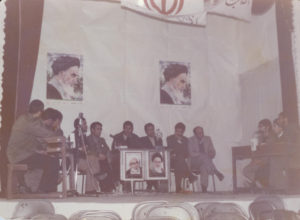 A number of Basījī students who had returned from the war front wanted to study statistics and probability. We were looking for someone who could teach them this. Professor Shahriyārī’s name was suggested for this task. When he was approached and given the details [as to who the students were to be], he said that he had not studied the subject himself, but asked that the textbook be left with him for a couple of days.

And he was able to teach the course quite proficiently despite the fact that it was not his subject and that he only had a couple of days to prepare for it.