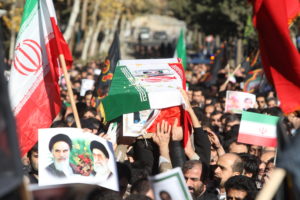 I would usually take my own car to work. My license plate ended with an odd number and so I could not go in to work with it that day. Majīd told me to come with him. We had not gone but 500 meters on Artesh highway when we came up against Aqdasīyeh traffic. The driver slowed down so that he could take the service road to the right toward Dār-Ābād. I remember that I had asked Majīd a question a few seconds before the explosion. He was studying one of his students’ thesis. He answered my question and went back to his papers. I found out later that he had a thesis defense session at Sharīf University that same afternoon. The motorcyclist pulled up close to our car and attached the bomb to the window. I had seen him from Majīd’s side window. Majīd’s driver had become aware of him too. He brought the car to a stop quickly and yelled for us to get out of the car. At that point I heard Majīd’s voice asking what was happening. I jumped out quickly to open the door for him. I saw Majīd’s hand reaching to open his seatbelt. The bomb exploded before my hand reached the door handle. It seems the bomb was designed in such a way such that its shock wave would be directed inward towards the car, which is why all of the force of the blast on Majīd bounced back to me and thrust me to the back of the car. I was not in pain and only felt the initial burn of the blast on my skin. I then learned that all of my face and hair and eyelids and eyelashes and eyebrows had been burned. I tried several times to get up, but couldn’t. Our driver came over and I asked him to take me to where Majīd was, but he kept on beating his head with his hands. A passer-by has recorded this scene. I dragged myself up off the ground with my elbow. The only time I felt pain was when I was dragging myself on the asphalt pavement. I dragged myself up to the car door. I did not see a scene of devastation. I only saw Majīd sitting up with his head having fallen back on his seat. Later I heard that his right leg and left hand had been completely destroyed. Because I had my senses about me, I knew that I had lost him. I wanted very much to have been able to go with him. I knew it would be the last time that I would see him. The paramedics were young and did not [have the sense to] take me to see Majīd [one last time]. I told myself that if I were a paramedic, knowing that this would be the last time that the injured party would see her loved one, I would have asked her if she wanted me to take her to her loved one so that she could take him in her arms one last time. I asked them if Majīd had been martyred. They comforted me and told me not to worry myself now. I asked him to tell me. He repeated himself and told me to be calm. I told myself that he is a kid and does not comprehend my situation. Of course I knew that Majīd had been martyred and had taken flight to the heavens, but the unfulfilled desire to see him one last time stayed in my heart.