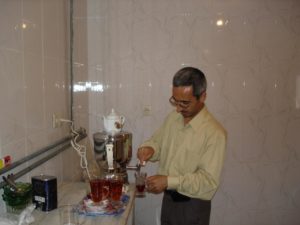 Master [Shahriyārī’s] behavior was so humble that one did not get the feeling that he or she was in the presence of a university professor. Once I saw that a friend of mine was visibly distraught. When I asked him what the matter was he said that Professor Shahriyārī was walking by when a delivery man was making a delivery of fifty books and he asked him for help unloading his cargo. And Professor Shahriyārī went to help him without a word of protest. My friend said that he went up to the delivery man and told him indignantly that the man whom you have put to your service is a professor! Professor Shahriyārī was well known to many [as a professor], but few knew that he was a professor of nuclear science. When they saw his picture after his martyrdom, they used to say, “Huh! He was a nuclear scientist?”