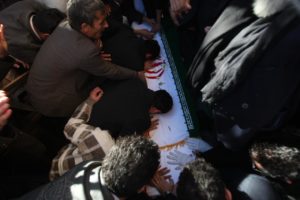 Shahīd Shahriyārī’s motorcycle messenger was highly distraught during the martyr’s wake and wailed in a loud voice [for his loss]. He was in his fifties or sixties. One of those present told him, “You are not Professor Shahriyārī’s son, so why is it that you are wailing his loss in this way?” He said, “Whenever I went to take a letter to be delivered from him, he would stand up in my presence.” It was interesting for us to see a person who saw Professor Shahriyārī perhaps at most ten minutes a week show so much emotion at his loss.