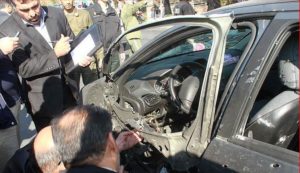 Professor Shahriyārī was a great man who did not place much stock in the world. The horizon of his vision was different than that of other people’s. Consequently, he was not easily moved by the tides of change. He understood the difference between a good car and a cheaply made car, but he was not concerned about these things. He would not spend his time on any old thing. In his dormitory room he had some small notes posted above his bed. He slept in accordance with a fixed schedule, so that one knew when he was going to sleep and when he would be up. For example, if someone went up to him at ten o’clock at night and said that he needed help with, say, Electronics 2, he would look at his datebook and tell him that he could spare him some time on odd days between such and such hours.