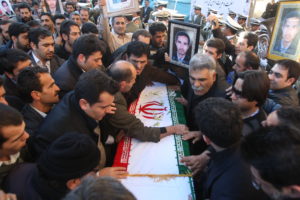 We still talk about Professor Shahriyārī. It has happened so many times where we have said, “If Professor Shahriyārī was here he would have said such and such or acted in such and such a way. I had taken a class of the professor’s during the semester that the incident took place. For a whole week afterwards, when I looked at the handouts, tears would fill my eyes. After the professor’s martyrdom the students in the class and I decided that we should complete the assignments which he had assigned to us as homework.