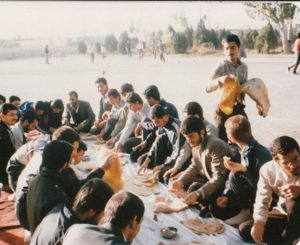 Majīd paid his Fifth Share (khoms) even when he was still a university student. Generally speaking, a student does not have the financial wherewithal to [qualify for having to] pay the Fifth Share, but he insisted on doing a yearly accounting of his financial status [to see how much, if any, Fifth Share was incumbent upon him]; he also was in the habit of performing supererogatory fasts. Even when he was not fasting, he ate very little and spoke in moderation. He did not participate much in the discussions that were in vogue among the students. Once he came to me and told me that he was suffering from a lot of pain the previous night. I asked him how he was doing now. He said, “I repeated [the invocation ritual formula] yā esmahu dawā wa dhekrahu shafā (O He Whose Name is Medicine and Whose Remembrance is Curative) until I got better.”

In terms of his politics, he did not participate in activities which were primarily or strictly political, but he did take political stances. And in such cases he was careful to avoid committing any sin, which is why he usually attended to the universal principles underlying the matter. If someone grieved him, he would not talk about that person [behind his back] to someone else. I still do not know why he transferred from Amīr Kabīr University to Shahīd Beheshtī University! All he would say is that [the atmosphere] there is more conducive to [his] work.