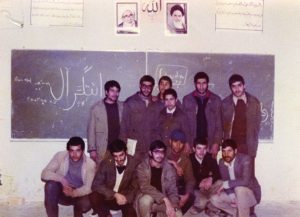 On Tuesdays a group of us which included Shahīd Shahriyārī would play football (or “soccer”). Once he had brought a watermelon for us to eat after the game. When the evening call to prayer was cried, we finished the game and everyone rushed to the watermelon, but Professor Shahriyārī began to make his ritual devotions in the sports clothes which he was wearing.