The Honor of the Scientific Community 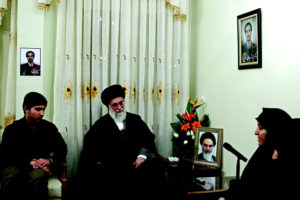 The martyrdom of Dr. Shahriyārī raised the standing and honor of the scientific community. The martyrdom of such a prominent and outstanding person demonstrated to the enemy that such people exist [even] within the academic environment of the Islamic Republic [of Iran]. The most important consolation which one must comfort oneself with and be content with in such instances is knowing that God the Sublimely Exalted has determined rewards for such instances of selfless sacrifice and martyrdom and for blood that has been spilled unjustly, the extent of the rewards of which is such that they are beyond our ability to imagine. These divine [spiritual] stations [which God has in mind as a reward for such martyrs] are so lofty and unimaginably exalted that they defy our imagination’s capacities {to encompass them]. And you can be sure that Shahīd Shahriyārī is [presently] in the greatest of [spiritual] states – a condition which, were any true believer or righteous person able to see a small portion of its [bounties] with his or her own eyes, that person would desire that he or she be subjected to a similar fate. And we thank Allāh, the Providential Lord and Sustainer of the Two Worlds [the present world and the world of the hereafter] that Shahīd Shahriyārī has attained to such a [lofty spiritual] station; and it is in this fact that we take our greatest consolation and comfort. But there is a second consolation and that is the [expression of] the people’s gratitude and appreciation. We were all witness to [the grandeur of] the way in which the people gave expression to their heartfelt gratitude and appreciation of this great martyr.

Ayatollah Ali Khāmeneī, the Supreme Leader of the Islamic Revolution