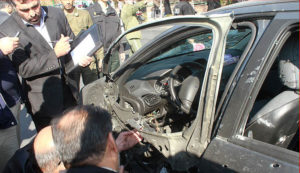 We left the house in the morning and got on the Artesh freeway. His wife was in the car as well. A few minutes later a motorcyclist came up to the car and attached the bomb to the glass panel on the side of the car where Professor Shahriyārī was sitting. Only a few seconds had passed when I stopped the car and called out to them to get out of the car. Professor Shahriyārī was studying a doctoral thesis and his entire attention was focused on it. It seems he had a thesis defense he had to attend that day. When I told them to get out of the car, Mrs. Shahriyārī got out and was about to open the door for her husband when [the bomb exploded and] she sustained injuries from the blast. The blast hit him hard. An ambulance came and took him to the hospital, but he had already been martyred.