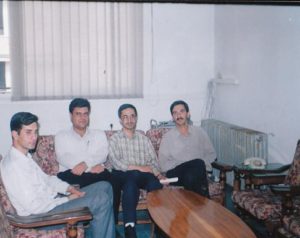 I got to know Majīd for the first time during a mathematics midterm exam. It was a hard exam, to the point that half the students failed to get a passing grade. I was descending the staircase in the Math Department when I saw seven or eight people gathered around someone. Majīd was standing in the middle and everyone else was asking him for the answers to the questions on the test, as if he was the professor who was teaching the class. And Majīd, for his part, answered all of the questions with ease. Majīd’s university transcript was full of grades in the 18’s and 19’s and even there were some 20’s as well, as if it were a high school transcript. Of course there were a few others who were exceptional academically, but Majīd’s preeminence was more outstanding.