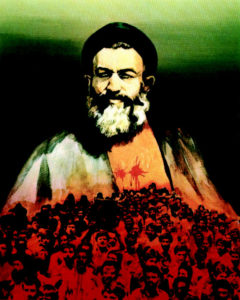 eyyed Mohammad Hosseini Beheshti ( 24 September 1929 – 28 June 1981) was an Iranian jurist, philosopher, cleric and politician who was known as the second person in the political hierarchy of Iran after the revolution. He was the main architect of the constitution and the administrative structure of the Islamic Republic of Iran who is also known as the selector and trainer of the several prominent politicians of the Islamic Republic