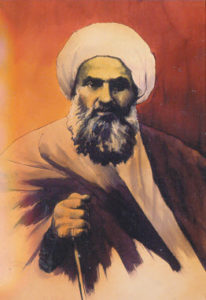 Hajj Sheikh Fazlollah Nouri; December 24, 1843 in Mazandaran – July 31, 1909 in Tehran) was a prominent Shia Muslim cleric in Qajar Iran during the late 19th and early 20th century and founder of political Islam in Iran. He fought against the Iranian Constitutional deviation and was executed for treason by Constitutionalists as a result.