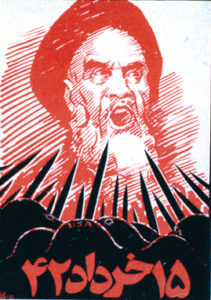 The demonstrations of June 5 and 6, 1963, in Iran (also called the uprising, or the events of June 1963, and known in Iran by the Iranian calendar as 15 Khordad were a protest against the arrest of Imam Ruhollah Khomeini after a speech by him attacking Iranian Shah, Mohammad Reza Pahlavi and Israel. The Shah’s regime was taken by surprise by the massive public demonstrations of support, and although these were crushed within days by the police and military, the events established the importance and power of (Shia) religious opposition to the Shah, and Imam Khomeini as a major political and religious leader. Fifteen years later, Khomeini was to lead the Iranian Revolution which overthrew the Shah and his Pahlavi dynasty and established the Islamic Republic of Iran.