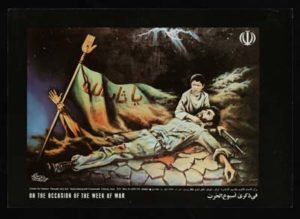 Rather than shy away from the grim realities of war, this poster positions them within a continuation of the devastating Battle of Karbala. Two disembodied arms rise up from the ground carrying a flag that pledges the vengeance of God (Ya thar Allah). The martyrs of Karbala are rising up to claim the newest martyr from the very same battlefield on which they died. Time between the 7th-century battle and the ongoing Iran-Iraq War is thus effectively collapsed. The poster depicts the threshold of death as the transitional moment in which soldiers join their fellow martyrs in paradise.