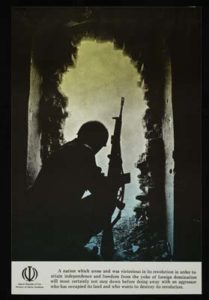 In this poster a soldier sits on the lookout in a bombed-out building, the yellow air outside indicating the use of a deadly chemical weapon. Hundreds of thousands of Iranian soldiers were either killed or permanently disabled by Saddam Hussein’s use of chemical warfare during the Iran-Iraq War. The quoted English text informs the viewer that despite such brutal attacks Iran will never surrender.