My Relation to General Sayyad Shirazi 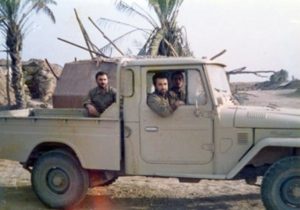 I have memories of most of the war’s well-known generals, one of whom was General Sayyad Shirazi. I was once invited to perform in an event but because of the crowds of people around the venue, I arrived there late. General Shirazi had already finished his speech and left the stage. When my performance ended, some people gathered around me and asked if I was related to the general. I said no and asked what would make them think we’d be related, to which they replied that the general had talked about me and my art for about a quarter of an hour.