When I Held the Megaphone Instead of the Gun 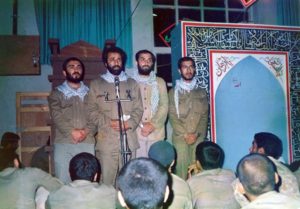 When the war had just begun, some of my young friends and I decided to go and fight just as the others had. At that time people used to recognize me and my voice. I remember the day we went to the military training base in the South, how they were all surprised by my presence. The drill instructor called out to me and said: “You mustn’t go to the front!” I was surprised to hear that and asked why. he said: “if you trust in what the Imam says, then you should known that everyone has to do whatever they can to defend the country, so you shouldn’t go there. You should be singing revolutionary and epic songs to encourage the soldiers. This is better for you and for the Revolution.” I still insisted that I went there to go to the front and fight, not to sing songs. Finally, the commander agreed to take me there but only to encourage the others. He persuaded me to hold a megaphone instead of a gun and sing uplifting songs, and that’s what happened. I ended up going to the front many times during the sacred war without so much as touching a gun.